March 20, 2018, Berlin – During his state visit to India, France’s President Macron agreed with India’s Prime Minister Narendra Modi last week to sell six French EPR reactors for the largest nuclear power plant planned in Jaitapur. Regardless of the fact that India has not yet signed the Nuclear Non-Proliferation Treaty. The plutonium from the reactors could be completely used for the construction of nuclear weapons without international control. In terms of energy, too, all EPR construction projects in recent years are highly problematic. 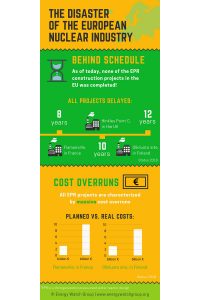 The European Pressurized Reactor (EPR), proclaimed in the 1990s as a new impetus for the renaissance the European nuclear industry, proved to be a financial disaster, fulfilling none of the industry promises, a new brief by the Energy Watch Group shows.

The EPR construction sites in Flamanville (France), Olkiluoto (Finland) and Hinkley Point C (UK) are exemplary of the failed nuclear industry with no single EPR having been completed to date. All existing EPR projects are characterized by years of commissioning delays, grave technical and security problems and exploding construction costs of up to tens of billions Euros.

The further construction of these reactors was secured only by means of multi-billion Euro state rescue packages. As a result, nuclear companies, especially the French AREVA and EDF, are increasingly under pressure and risk of bankruptcy as it was in the case of the US-Japanese company Westinghouse.

“The promises of “inherently safe” EPR reactors did not materialize and turned into a heavy burden to European taxpayers. It is time to immediately end all new nuclear energy projects and phase-out the existing ones, ” President of the Energy Watch Group Hans-Josef Fell and co-author of the brief said. “Renewable energy sources are the safest and financially better solution today. There is no longer any single reason to rely on or invest in nuclear energy.”

“The security threats of the aging European nuclear reactor fleet are constantly increasing. The new generation of EPR reactors even worsens security and financial risks for the population. Old and new flaws are closely interwoven, as the nuclear triangle Fessenheim-Flamanville-Hinkley Point clearly shows”, Eva Stegen, independent energy consultant, working for the electricity provider EWS Schönau, and co-author of the brief said.

The Energy Watch Group brief “The disaster of the European nuclear industry” documents the following disastrous developments in the EPR construction sites and nuclear as a whole in the European Union:

The Energy Watch Group (EWG) is an independent, non-profit global network of scientists and parliamentarians. The EWG commissions research and independent studies and analyses on global energy developments.