In 2006, the Energy Watch Group (EWG) published a study on the future global uranium production.

At that point, it was and still is the prevailing opinion – especially in the nuclear community – that uranium could always be mined in sufficient quantities, no matter how many nuclear reactors were built and how much uranium was used for the fuel elements. 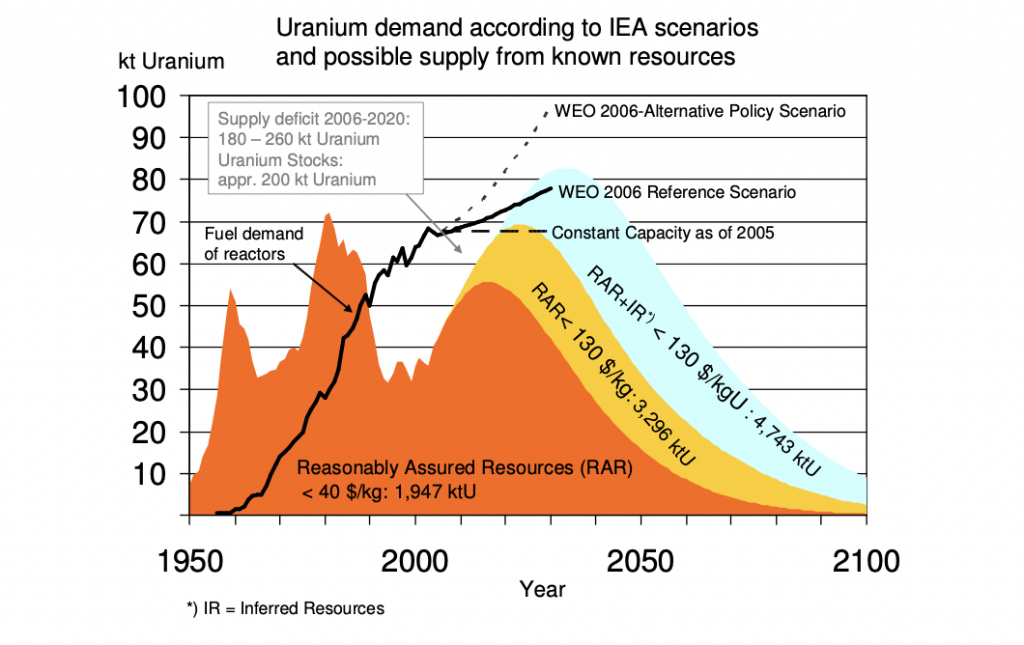 The study results were often denied by other institues and branded as inaccurate, because they showed a shortage of uranium production starting around the year 2020. 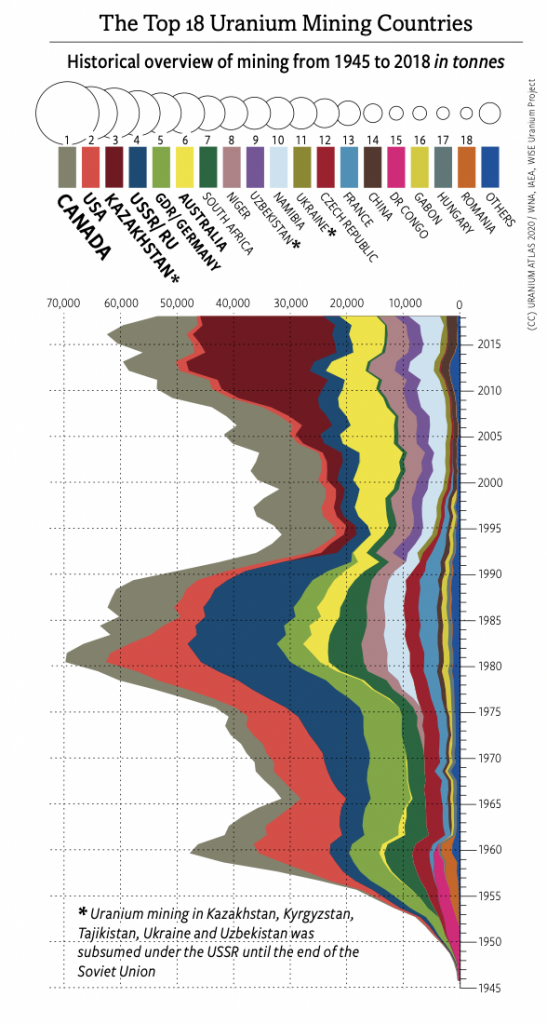 This development should sensitize the world’s energy policy maker

Compared to renewable energies, nuclear power is not only much more expensive. It also usually takes several decades longer to build a nuclear reactor and construction costs are often more than three times higher than planned. In addition, safety issues and the problem of nuclear waste disposal still havent been resolved, and military misuse of nuclear matrial for nuclear weapons remains common.

Nevertheless, amongst others, governments in Eastern Europe amongst are planning nuclear reactors today that will not be operational for at least another decade or two. Blind faith is placed, without deeper analysis, in the fact that uranium mines would continue to produce cheap uranium for another 50 years.

But the significant and for many unexpected decline in global uranium production since around the year 2015 speaks a different language. It is more likely that even with increased prices, uranium will no longer be available in sufficient quantities to operate all of the world’s nuclear reactors in 20 years.

A second period, similiar to the one from 1995 to 2005, when successful nuclear disarmament decisions resulted in the destruction of weapons uranium in nuclear reactors, making the extraction of uranium from mines partially obsolete, is no longer in sight. After the end of this weapons uranium destruction in 2005, uranium production therefore rose steeply again.

However, this rebound in global production was not achieved by restoring higher uranium production from traditional mines in the USA, Russia, Germany (GDR), South Africa and the Czech Republic, but almost exclusively by opening up new mines, especially in Kazakhstan, and to some extent in Australia and Canada. This too will hardly be possible in the future, as regions with large undeveloped uranium deposits, like Kazakhstan 20 years ago, are no longer existing.

Many of the planned projects for the expansion of nuclear reactors in the world most likely won’t be able to go into operation even after their construction is completed, because they simply will not have any uranium left or the high uranium prices will drive the operation of nuclear reactors even deeper into inefficiency compared to renewable energies.

However, of course, a standstill or even a shutdown of existing nuclear reactors can also reduce the demand for uranium. That is exactly what is taking place at the moment.

All the claims from the nuclear supporters, stating that nuclear power is a reliable energy source, are being disproved in France, the No. 1 nuclear country, right now. Due to rust and cracks in pipelines and several other causes, 29 of 56 nuclear power plants in France are currently at a standstill.

By comparison, the exchange electricity price in Germany on the EPEX spot market was 165 euros/MWh in April 2022.

This shows once again that the story of cheap and secure nuclear power is nothing but a fairy tale. In a few years, it is to be expected that the further shortage of uranium production will additionally drive up nuclear power prices. The EWG’s analysis from the year 2006 has predicted the developments that accurately that it seems likely it will be able to forecast the actual availability of uranium in the coming years as well.

Thus, it must be clear: Any new nuclear construction is building up on the false belief of endless availability of uranium, and even the operation of existing reactors is highly uncertain, as the current example of France teaches us.

Only the rapid expansion of renewables can provide a guarantee for a secure and cost-effective power supply in the future. Relying on nuclear power is a misconception, which has been recognized in the anti-nuclear movement for many decades and which is becoming more and more obvious today.