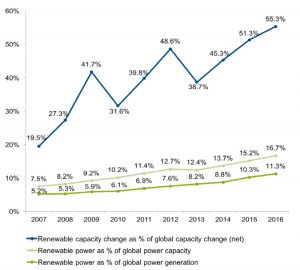 The title “bye-bye coal” does not stem from us or from an environmental organization. It comes from the Bloomberg New Energy Finance (BNEF) analysts. By 2030, it will be cheaper to build a wind farm than to keep an old coal generator running, and by 2036 it will be less expensive to build a solar farm, according to BNEF. Read about slow but sure steps towards the end of coal in Europe and in China as well as abut slow death of nuclear in Japan. Meanwhile, 2016 was another breakthrough year for renewables, according to a new UNEP and BNEF report. Despite declining global investment in renewables, the number of installations was on record high around the world. Read about success stories and new studies paving ways to 100% renewable energy globally in our April newsletter.