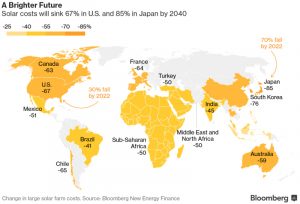 Renewable energy capacity worldwide was boosted by a record amount in 2016, as costs of wind and solar PV kept dramatically falling, two latest major energy reports show. Especially solar PV is becoming so cheap that it will provide cheaper electricity than coal in China and India as soon as the early 2020s. Meanwhile, a third of the business-as-usual investment until 2025 by oil and gas majors is inconsistent with the Paris Agreement climate targets, according to another report. And many top multinational banks kept lending billions to extraction of fossil fuels in 2016 while claiming their green credentials. You will also find inspiring stories from around the world on 100% renewable energy, news from the global divestment movement and new studies on Kazakhstan and the Åland islands in our June newsletter.