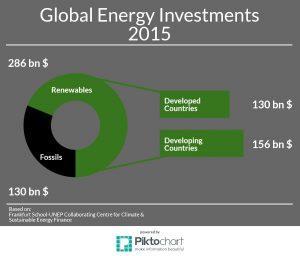 2015 was a record year for renewables as worldwide investments in clean energy outpaced gas and coal by 2:1. For the first time, developing and emerging countries, most notably China, invested more than developed ones. Meanwhile, the world’s largest private coal miner Peabody has filed for bankruptcy, China’s Five Year Plan leaves no big hopes for coal and Saudi Arabia announces its plans for a post-oil era. A new film about the global energy transformation is out in the German cinemas. This news and a new study on a 100% renewable energy system in Brazil in our newsletter.