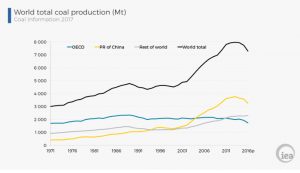 As banks and governments remain heavily invested in the fossil fuel industry despite the international climate committments, shareholders increasingly start to hold their banks and companies accountable. In Australia, in the first world’s case a couple has filed a lawsuit against its bank for not informing about climate change risks. Meanwhile, the global production of coal fell significantly in 2016, mainly due to a sharp decline in China. And the nuclear industry in the US and Europe is slowly but surely becoming obsolete.

The fall of coal and nuclear is mainly due to the success of renewable energy sources. Renewables have reached the tipping point in many countries in the world, according to Morgan Stanley’s latest report. This confirms forecasts of other financial analysts that predict renewables to become THE cheapest form of power generation by 2020. You will find this news and the latest studies on renewable energy in G20 countries as well as India and SAARC in our July newsletter.