The projections of the International Energy Agency (IEA) for PV have proven to be unreliable in the past. The Energy Watch Group had discussed this in detail in September 2015. The analysis of the current World Energy Outlook (WEO) 2015 shows that the IEA apparently remains at its assessments for future energy scenarios. The following analysis demonstrates this fact on the concrete example of the projections for photovoltaics (PV).

In the recent years, the IEA has ignored the rapid market growth of renewable energies particularly the added capacity of PV and used outdated data in its scenarios. Thus, the IEA ignored the market growth in 2014 and the new added capacity record for the year 2015, which could be recognized already in September. In particular, the IEA makes the highly unlikely assumption that the market growth for PV drops in 2014 and the annual added capacity remains lower than in 2013 for the next decades. For a still young world market, these are highly unlikely assumptions, which could only be conceivable if political decisions would regulate solar power as undesirable worldwide. 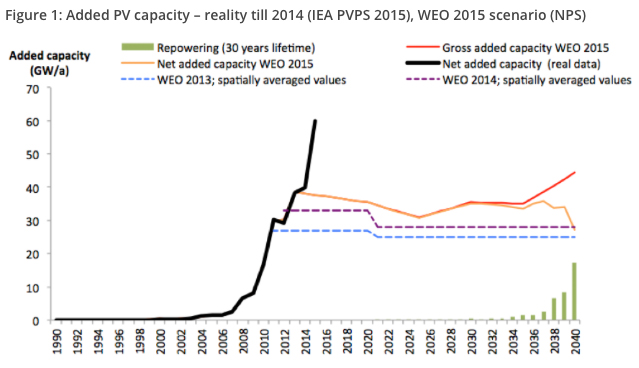 Figure 1 shows the annual market volume for PV. The black solid bold line shows the real added capacities from 1990 to 2015. For 2015, however, at the end of September an estimate of international market research analysts suggests an annual added capacity of 55- 60 GW. In the WEO, no concrete added capacity numbers are mentioned. This insight can be counted back from total installed power capacity. Since the values in the WEO are only given in five-year steps the Energy Watch Group has calculated an adapted scenario, matching the cumulative installed power capacity of the WEO. For each time period, a constant added capacity rate was calculated to reflect the exact value for each year.

At least until 2035, the annual added capacity rate of WEO 2015 „New Policies Scenario“ remains below the level of 2013. The Energy Watch Group has made various assumptions in the calculations on the lifetime of the PV systems. With a lifetime of 30 years, a rapidly increasing proportion of old plants must get substituted starting from 2035. Taking this into consideration, assumptions of the IEA mean that the net added capacity starts to decline again from 2035.

Assuming a PV system lifetime of 25 years, the beginning of the substitution of old power plants shifts by 5 years. Taking this into account, the net added capacity rate till 2030 in the WEO remains below the already experienced real expansion rates in 2013. Thereafter, the gross added capacity rate must increase significantly. Table 1 shows for the respective periods the calculated gross expansion rates, leading to the installed power rates of the IEA scenario.

The required increased added capacity rate of the last five-year interval against the trend of previous years is implausible. This leads to the assumption that the IEA has not taken into account the need for repowering.

In addition, the figure shows the added capacity rates, as they were used in the WEO 2013 and the WEO 2014. However, only the average net added capacity rate was calculated from the difference of the installed power. Nevertheless, it shows how the scheme of the IEA continues. In either scenario, it is assumed, that the market growth at the beginning of the scenario arrived at the maximum and will decline in the future.

There are other institutions dealing with market scenarios for solar power generation. One of the best known is the scenario energy [r]evolution created on the regular basis, which was jointly commissioned by Greenpeace, GWEC and SPE in 2015 and carried out by the renowned German Center for Aerospace. Figure 2 shows the IEA scenario together with energy [r]evolution 2015 and the forecasts of Bloomberg New Energy Finance (BNEF), published in the ‚New Energy Outlook 2015‘. Energy [r]evolution updates the empirically observed market growth in recent years. In previous reports of energy [r]evolution it was observed that the projections corresponded quite well with the real development. This is true not only for PV but to a similar extent for wind energy.

Misleading IEA scenarios can not be perceived as credible. It is hard not make any judgment of its intentions. 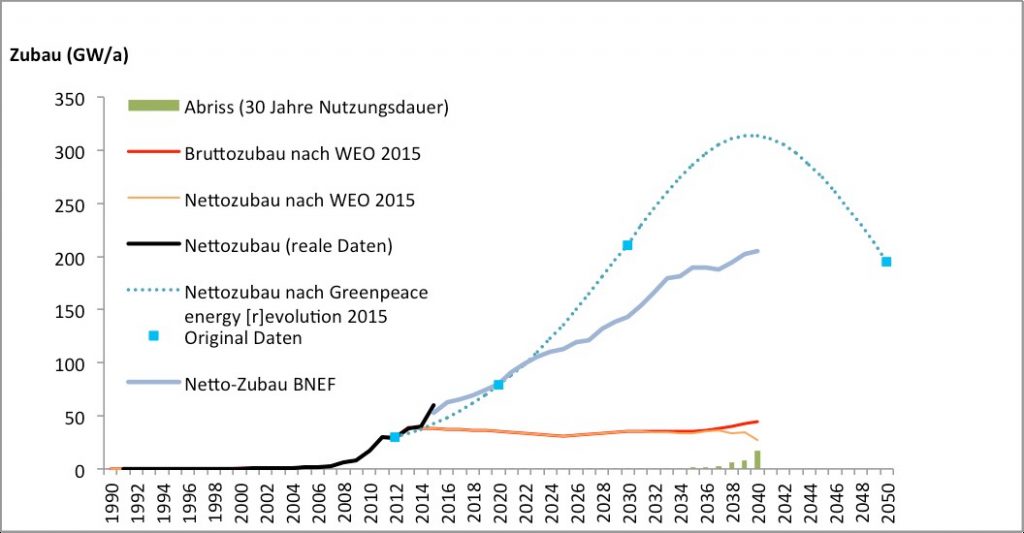 The decline of added capacity in the Greenpeace energy [r]evolution scenario from 2040 is justified by the fact that an even nearly 100% renewable energy supply is reached. Therefore fossil and nuclear power plants are already substituted and thus there is only a substitution requirement for already built power plants, but it comes in use later in full volume due to the long technical lifetime of PV systems. It should be noted that other authors expect higher installation numbers around the middle of the century and in particular no decline, which is essentially based on the fact that it is assumed on the one hand, a higher proportion of PV in the energy mix an on the other hand, a higher worldwide energy demand.

The global political economic conditions point to an even faster growth of added capacities compared to the previous expansion rates: The cost of PV will continue to decline, as well as the cost of battery storage, which will further stimulate growth of PV installations. At the same time even more financial investors divest from financing fossil and nuclear projects. This is partly because political blockades in Europe hinder a fundamental reform of the electricity market design, therefore only poor financial returns can be expected. Moreover in many parts of the world climate change is finally being taken seriously by an increasing number of financial investors and private investors concerned about the incalculable risk of nuclear power. This liberated capital is increasingly being invested in renewable energies. Particularly in view of this very dynamic development for years, the IEA forecast for PV and other renewable energy sources appear incomprehensible.