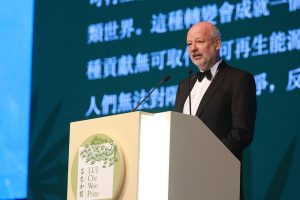 Hong Kong (October 4, 2018) – Hans-Josef Fell, President of the Energy Watch Group (EWG) and former member of the German Parliament for the Alliance 90/the Greens was awarded the LUI Che Woo Prize, one of the most renowned awards worldwide, for his lifetime achievements.

The prize of HK$20 million (around $2.56 million) aims to recognize and honor individuals or organizations all over the world with outstanding achievements and contributions in three categories: “sustainable development of the world”, “betterment of the welfare of mankind” and “promotion of positive life attitude and enhancement of positive energy”.

„The three laureates this year share the same vision with the LUI Che Woo Prize. They not only believe in making a better world, but also overcome difficulties with courage, wisdom, and selflessness. They are role models in their fields and have greatly contributed to the world; inspiring more people to participate and jointly create our future, “ Dr. Lui Che Woo, founder and chairman of the LUI Che Woo prize council, said at the award ceremony on October 3, in Hong Kong.

In his speech Hand-Josef Fell highlighted that humanity has the chance to stop global warming with the help of 100% clean renewable energy and clean carbon-reducing agriculture. Together with the Energy Watch Group and with a strong support of the LUI Che Woo Prize he plans to continue working towards reaching this goal.

In addition to his speech at the award ceremony, with nearly one thousand invited guests and representatives of the government in Beijing, Hans-Josef Fell held various talks including one with Hong Kong’s minister of the environment. In April 2018, Hong Kong for the first time introduced a feed-in rate for solar and wind power, taking an initial step towards renewable energies. Today renewable energy covers only 1% of Hong Kong’s energy demand.

The prize for promotion of positive life attitude and enhancement of positive energy was given to the Indian Pratham foundation. As one of the largest NGOs in the country, working with 10.000 teachers and educators, Pratham focuses on high-quality, low-cost interventions to address gaps in the education system. Pratham directly helps one million children attain basic literacy and numeracy annually.

The 2018 Welfare Betterment Prize was awarded to the World Meteorological Organization (WMO). WMO sets worldwide standards and provides the framework for international cooperation leading to better monitoring, forecasting and communication of meteorological hazards on a global scale. Today, due to the work of WMO millions of people can be warned and safeguarded from extreme weather events.

The Energy Watch Group (EWG) is an independent, non-profit, non-partisan global network of scientists and parliamentarians. The EWG conducts research and publishes independent studies and analyses on global energy developments. The mission of the organization is to provide energy policy with objective information. For more information, please visit www.energywatchgroup.org.

About the LUI Che Woo Prize

Founded by Dr. LUI Che Woo in 2015, the “LUI Che Woo Prize – Prize for World Civilization” is an annual, first of its kind, international cross-sector award for advancing world civilization and inspiring people to build a more harmonious world. It aims to recognize and honor individuals or organizations all over the world for outstanding contributions and encourages the continuation of that work in three objectives: sustainable development of the world, betterment of the welfare of mankind and promotion of positive life attitude and enhancement of positive energy. Each Prize is awarded to a single recipient (i.e. no sharing of a Prize), who can either be an individual or an organization. For more information, please visit: www.luiprize.org.